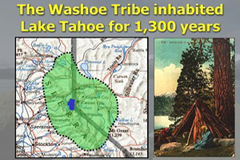 Lake Tahoe is demonstrably one of the most beautiful places in the world and exhibits a truly fascinating history. Not only does this massive fresh water alpine lake produce an enormous variation of fanciful sights to see, it also tenders a plethora of remarkable creational facts that reveal an intriguing chronicle worthy of contemplation, both of which contribute to making this titanic body of water a highly appealing attraction that entices tourism from around the world.

Bordering California and Nevada at an elevation of 6,225 feet with 72 miles of shoreline, Lake Tahoe is the largest alpine lake in North America. Boasting a depth of 1,645 feet, it is the second deepest lake in the United States, and with 122,160,280 acre feet of water, it is the sixth largest by volume. To give this enormity some perspective, if the lake’s aquatic were poured onto an area the size of California, the depth of water would measure 14 inches. 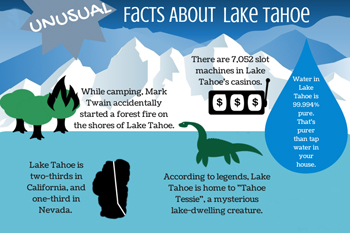 Geological formation of the Lake Tahoe Basin occurred about 2 million years ago during the ice ages. The rise and fall of the landscape due to geologic block faulting triggered its creation. The Basin is surrounded by the immense Sierra Nevada, the prominent mountain range that extends about 400 miles north to south and approximately 70 miles across from east to west. The majestic beauty these natural compositions portray is extraordinary, an allure that influences the draw of approximately 3 million vacationers every year. 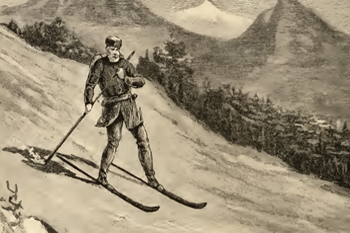 Another tantalizing verity pertaining to Lake Tahoe’s consequential past is the account of its snow skiing timeline. Legendary John “Snowshoe” Thompson, an early resident, was one of the first to carve slopes through the Sierras while delivering mail during the 1850’s. In 1960, the 8th Winter Olympics were hosted in Squaw Valley, an astounding ski resort adjacent to a quaint village, the Resort at Squaw Creek, situated on the North Shore.

With one chair lift and a few rope tows, Heavenly Ski Resort opened its doors on the South Shore in 1955. Evolving into a world-class resort, Heavenly Mountain is currently a major attraction in South Lake Tahoe. The greatly recognized lodestone encompasses 4,800 acres of mountainous territory with peak lift-service elevation of 10,040 feet, awarding some of the finest skiing conditions in the world. The resort’s gondola whisks skiers and sightseers up the lofty mountainside for an approximate 2 ½ mile journey, unveiling amazing views of the glorious panorama along the way. The midway station affords visitors an aerial brilliance as far as the eye can see, and for the adventurous couple seeking to tie the knot in a place comprising a spectacular backdrop, Heavenly offers the optimal venue and hosts weddings on the observation deck.

The assorted facts about Lake Tahoe and its formation are convincingly entrancing, and its impenitent beauty is absolutely beguiling. These components make the “Lake of the Sky” a most fascinating place and are largely responsible for attracting masses of visitors each year, many of which consider the voluminous alpine creation not only a factoid center of interest, but also a phenomenal refuge of mammoth splendor.